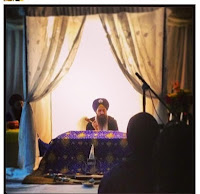 Last Friday evening there was a house Keertan programme in Walsall. I arrived slightly early as I was working nearby. When I went inside the tent where the Diwaan was take place, I was taken aback at how beautiful the Palki Sahib and the arrangement for Satguru Ji's throne had been made. I was told that Satguru Jee's Saroop was coming from the new Gurdwara in Walsall and that the local Gurdwara sevadaars came over to the house and set up the Palki Sahib and everything else. I was told that the Gurdwara Sahib don't just allow someone to take Guru Sahib's home, but instead they come over and do all the arrangements and make sure it is a suitable place and there is enough satkaar (respect) etc. I found this very pleasing to hear.

When we went to the Gurdwara Sahib to bring Satguru Jee's Saroop to the house, I was moved by the pyaar and respect that the local Sevadaars done the seva and have maintained the Gurdwara Sahib. The local sevadaars covered the front car seat with a nice rug and and placed a large pillow covered with a white cloth on the seat. Then they rolled out white material from the Sach Khand room to the car. I was really impressed by the organisation and co-ordination of the seva.

It was nice to see so many young children do keertan at the programme. Usually children rarely get a chance to do Keertan. Afterwards other Gursikhs did Keertan. The programme was very uplifting. 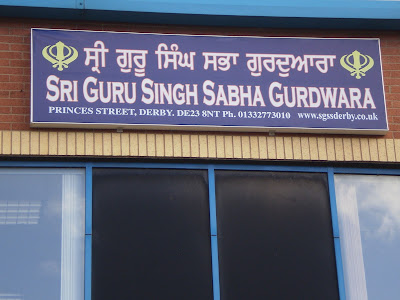 After the programme at Amrit-vela I drove up to Derby Singh Sabha Gurdwara as a stop off point before going to Bradford on Sunday to do a talk at Gurdwara Singh Sabha. Whilst at Derby I was told that that Singh Sahib Giani Raam Singh of Damdami Taksaal (Sangravan) was going to visit the Gurdwara Sahib that evening to meet the elder Gursikhs of Akhand Kirtani Jatha and that it was welcome to come along to meet Singh Sahib jee if I wished. With Guru Sahib's kirpaa, daas got to meet Singh Sahib and other Gursikhs that accompanied him. It was lovely hearing Bhai Sahib share inspiring stories of past Gursikhs and share a strong message of Panthic Eikta. 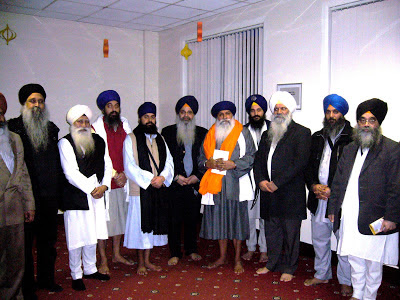 Sometimes issues like whether Mool Mantar is up to "Gurprasaad" or "Nanak Hosi Bhi Sach", whether Raagmala is read or not, and which length Rehraas Sahib one reads (i.e. Akal Takht Sahib version, Taskaal version, Nanaksar version, Sri Hazoor Sahib version or Nihang Singh version etc - each claiming to be the "sampooran" version) are made so divisive in the the Sikh youth, in particular in this country and on the Internet. In particular its not an issue of our different personal Rehats or what we believe about Maryada - the issue really is when some people use these differences to make hateful and upsetting comments such as "they are not Sikhs, we are Sikhs," "they don't believe in the Guru, but we do," "they will go to hell etc for doing paath up to their...", or reverting to abusive language towards others.

It was so uplifting hearing Giani Raam Singh's views on this particular matter which seems to be growing in the Sikh youth in UK and on the Internet. Singh Sahib Jee is the nephew of Baba Giani Kartar Singh jee Bhindranwale and studied in Damdami Taksaal under Baba Giani Gurbachan Singh jee Bhindranwale and Baba Giani Kartar Singh jee Bhindranwale.  Bhai Sahib shared a story and said, "Someone asked me where is Mool Mantar up to. I told him that I have not come to create rifts in the Sangat or divide Sikhs with my personal view. The main thing is how much abhiaas (repetition) of Mool Mantar you do, regardless whether it is up to "Gurprasaad" or "Nanak Hosi Bhi Sach". You will reap equal rewards for repetition of any Bani that you do with love. Tell me, how much Mool Mantar abhiaas do you do?" The guy apparently said he doesn't do any which Giani jee says shows how people who do abhiaas and are focused on building their jeevan are not bothered by these small issues.

Singh Sahib jee shared stories of how the Mahapurkhs of Taksaal enjoyed attending Akhand Kirtani Jatha rainsbaaees and that every Barsi of Baba Kartar Singh jee Jatha Singhs would do a Rainsbaaee at Mehta Chaunk. Giani Jee and other Gursikhs (of both Damdami Taksaal and Akhand Kirtani Jatha) who had come from India and done Sangat of Baba Jarnail Singh jee Bhindranwale shared that in India there was no problem and divisions. Gursikhs shared that no one asked anyone if they were a 'Taksali' or 'Jatha Singh' - they read Bani together and done Simran together and the length of Rehraas, the length of Mool Mantar and Raagmala being read or not at the end of an Akhand Paath was not made an issue - people just go on with things and weren't bothered losing sleep over these minor differences. It was shared during the time Sant Jarnail Singh jee Bhindranwale stayed at Sri Akal Takht Sahib, Raagmala was not read, however Sant Ji had no issue and attended the bhogs. It was shared in the meeting that Sant Ji scolded his nephew who tried to force the Granthi Singh to read Raagmala, saying that one can never force one's personal Maryada on the Panth and we should always respect the Maryada of Sri Akal Takht Sahib - despite strongly believing in Raagmala.


Singh Sahib shared that during 1984 there were attempts by external forces to create rifts between Taksaal and Jatha Singhs by spreading false rumours and lies, however with Guru Sahib's kirpaa love between the Gursikhs remained. Singh Sahib and other Gursikhs recollected their memories of the 1978 Vaisakhi massacre where Shaheed Bhai Fauja Singh of Akhand Kirtani Jatha attained martydom with 12 other Gursikhs whilst protesting against the disrespect shown towards Sri Guru Granth Sahib Ji by the fake Nirankari government supported cult. Sant jee knew that Bhai Fauja Singh jee and other Singhs of Akhand Kirtani Jatha don't read Raagmala and do Mool Mantar abhiaas up to "Gurprasaad," however this was not even an issue worth considering when Sant jee went to the Rainsbaaee Keertan in Amritsar before the massacre and asked Singhs to gather to give a reply to the fake Nirankari cult who was insulting Guru Sahib. Sant jee did Ardaas for all the Singhs and afterwards did their sanskaar (funeral rites). Sadly, today it sometimes feels that we don't consider one another even Amritdharis because of different views on Maryada and treat someone worst than an atheist, yet the Mahapurkhs of both Jathebandis showed pyaar and treated one another as pooran gursikhs.

It was shared that after 1984 great attempts were made by external forces to create a rift between these two Jathebandis through planting people to spread misinformation because both groups were on the forefront of spreading Sikhi and defending the Sikh faith. Both groups shared that there was need to send a message of unity and love so that we can tackle the bigger issues of growing fake Gurus in Panjab that are attacking Sikhi, Sikh youth drifting away from Sikhi, and how crime and immorality is increasing in Panjab.

In particular both groups gave a strong message of Panthic unity and emphasized that one particular Jathebandi or organisation is not the Panth and that everyone must remember that our first priority and allegiance is to the Khalsa Panth and then our individual organizations. Although both groups have different views on whether Raagmala is Bani, the length of Mool Mantar, Kesh or Keski the Kakkaar etc, both groups came to an agreement that they would respect the Panthic Sikh Rehit Maryada authorized by the Sri Akal Takht Sahib and authority of Sri Akal Takht Sahib as a basis for commonality and unity and agree to disagree on the 1% differences they had and focus on the 99% things they had in common. Both groups made a written agreement that emphasized that all Gursikhs should avoid causing splits or divisions on Panthic issues which the Panth has yet not come to a decision, and show love for another rather than hatred and ill-feeling.


On Sunday afternoon, after coming back from Bradford, I came back to Derby where a live programme was held that was televised on Sangat TV (Sky channel 847). Gursikhs from both Jathebandis shared the message of Panthic unity and love via the media to the wider Sangat. It was so nice when everyone on the stage from the different Jathebandis done Naam Simran together.

It was one great step for inspiring the young and old, to not hate one another for our differences. However instead by united while different and still consider one another as pyaare Gursikhs of the True Perfect Guru. 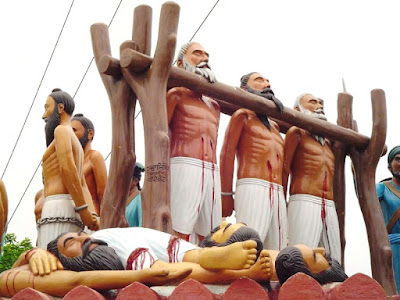