My Visit to a Primary School 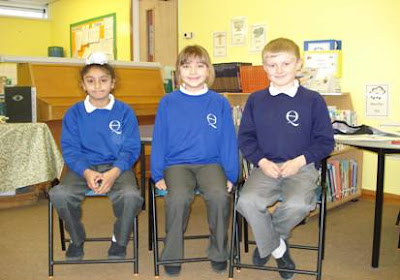 Today I went to a Primary School near to where I live. A young Singh, aged 6, has moved with his family from Holland to where we live in UK. There's not many Sikhs were we live (well very FEW Sikhi Saroop wale people).

The school the kid is in doesn't have any other Sikh children. So the family were concerned about his Kesh and possibility of children not understanding why he looks different, causing problems etc. Especially because he can only speak Dutch and Panjabi yet.

So I went to the young Singh's class today to explain about why Sikhs have Kesh, we look different and basics of Sikhi. WAHEGURU. The kids were soooo SMALL. They were 5 - 6 years old. One girl was 7yrs old. They were so funny. Going into the classroom brought back memories when I was at primary school. I felt like a GIANT. The tables and chairs were really small!!

So the kids got registered by their teacher, then I was asked to sit in the teacher's chair and talk to the kids. The kids patiently sat on the floor and looked at me. The teacher introduced me and the kids all together (like in one voice) said, "Good morning Manvir". It was really cute. When they first came and sat in the classroom they said, "Good morning Mrs...., good morning everyone." Memories flooded back of school. :)

I asked the children "Everyone excited about Christmas?" The kids eagerly put their hands up and said "yes". I asked whose birthday do we celebrate on Christmas. They said, "Jesus". I said "who was Jesus." I explained "Jesus was a special man, sent by God, to tell us how to be nice people and be good. Jesus taught us how to good children, didn't he?" "Yes" they replied. "Well, another special man, sent by God, was 'Guru Nanak.' Can you say "Guru Nanak"?" All the children said "Guru Nanak" like three times.

"Guru Nanak told us to remember God always, share everything you have, and live like good people. On Christmas, when you get sweets and chocolates. Do you eat them all yourself or share them?" All the children shouted out, "We share them." "Well done, thats what Guru Nanak taught us, and also Jesus taught us. You are very good children." 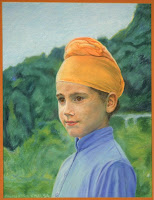 When talking about the Kesh I asked the children, "who has an arm?" "who has a leg?" "who has hair?" I got the children to touch their arm, leg etc etc and wave it about. It seemed to make them happy and they laughed. I said God has given us an arm and leg, and He has also given us hair. "Who has hair?" Everyone pointed their hand up. "Well some of you have long hair, and some short. Those with long hair, I see that one person has her hair in braids, another in a pony-tail. How else can you keep your long hair?" One child said, "You can tie it up on the top of the head" and he pointed at the young Singh.

"Our special person, Guru Nanak, told us that just as you take care of your body, you should look after your hair. Our special person has told us not to cut our hair. Just like some of you have braided your hair or have put it in a pony tail. We keep our hair in a knot on the top. We all have hair, but some of us decide not to cut it and we decide to keep it clean and tidy by tying it up on our head. Does that sound odd or silly to you?" The children replied, "No".

"What's good about tying your long hair on the top of your head?" Loads of children put their hair up. Some said, "Ermm.... I have forgotten what I wanted to say." Some said, "So hair doesnt go in our face". I said "Well done. To take care of our hair and make sure that it doesn't get mucky and dirty, we tie it up and keep it covered with material." Pointing to dastaar I said, "This is called a "Turban". Who can say "turban"?" Everyone shouted "turban" about three times. :) I explained that just as you wear clothes to protect your body, we tie something on our head to protect our hair.

"Now do it seem odd that me and Vikram keep long hair and keep it covered?" The children smiled and said "No".

To end with I asked, "Does anyone have any questions." Most of the questions were totally off the mark and were random comments. Bit still it was interesting and funny to hear them. Someone started to tell me when their sister's birthday was, someone asked me whether I knew when Vikram was born, another person asked me "Did you go to school as well." So fun to hear the kids. One child asked, "Why aren't we allowed to touch Vikram's hair?" The teacher had told the children that no child is to touch or play with the Singhs Kesh or Guttee.

I picked a girl sitting near the front. I asked her, "how would you feel if I did this..." I got my hand and placed it near her face and pretend to touch her face and hair. I asked, "is it nice?" She said "no." Then I asked a child who had his hair gelled, "How would you feel I started to touch and mess around with your hair? Would you like it?" He nodded his head saying "no." Just as you wouldn't like someone touching your face or hair with their mucky and dirty hands, Vikram doesn't want anyone touching his hair. I asked them, "Does that sound fair?" "Yes it does" they replied.

Its challenging to educate young kids when they are only 5 - 6 years old. The concentration span is very low. However they have a lot of enthusiasm. I tried to make the talk interactive and get them to shout out, which they enjoyed. Apparently, the Singh is happy and the children don't find his Kesh odd or silly now. :)
Manvir Singh at 10:26 pm